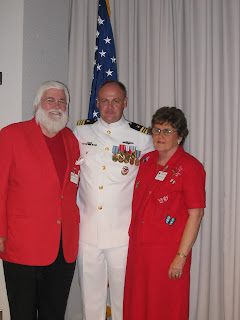 I was in my home office with the tv on. All of a sudden Matt Lauer sais “something is happening in downtown New York.
All news then went to the first tower where the plane had flown into it. I called for my wife to come into the office to watch. The next thing was the second plane flying into the second tower. We knew we were being attacked. By whom, no one knew.
The news then came that a plane had flown into the Pentagon. I heart skipped a beat, knowing that our foster son Alex was there. Alex, a Naval Intelligence Officer  assigned to the Pentagon .
The news  about the Pentagon began to escalate, first the plane had flown into the Navy, Marine section,
Then it was stated that it was the Intelligencer section, I knew that was Alex’s section. I really began to be concerned about Alex’s safety . I immediately tried to call Alex to no avail. All the phones were totally tied up.
By this time we had talked with Valerie and Barry, our two birth children. Barry, lived in Florida, he said he would try from there to do all he could to try to get in touch with him.
We spent the next five hours in agony as we watched the television account of all that was happening, all the time not knowing anything about Alex.
At 1;00 o’clock we received an email from Alex. He was safe. The plane had stuck his office but he was ten minutes away from it. God had answered our prayers Alex was safe.
There were many  days of concern after that. Alex was one of the first men to go to Afghanistan chasing
Al Queda. He was awarded the Bronze Star for bravery while there.
One of the highlights of my life was to be able to take part in his retirement service from the Navy at the Pentagon.
After his retirement from the Navy he is still chasing the “bad guys” as an “counter-terrorism”  specialist.
We are very proud of Alex and all he does. We are also very proud of our other two children Valerie and Barry and all the do.

Jim Pollard.
Jim@TheFabulousFifties.net
Posted by Santa Claus at 11:23 AM

Guide To Dealing With and Caring For The Elderly